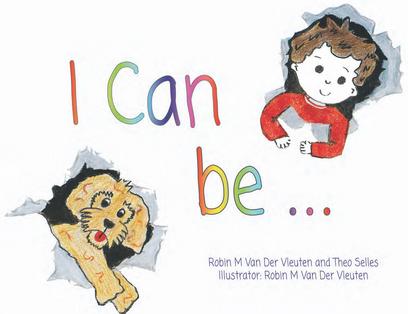 ​​Six year old George has a problem. He doesn't know what he's good at, or what he can be. His classmates are very good at all kinds of things, which they Show and Share for Miss Apple. But when George tries to do those things, he fails miserably. The more he tries to be like other people, the more unhappy he becomes.

Family Therapist, Theo Selles and Primary School Teacher, Robin Van Der Vleuten team up to provide an important message to children. Follow George's adventures as he discovers what he's good at and how to be himself.

It was a little daunting to write a kid's book especially when it's been a while since I was a kid. What could be important to a kid - important enough to want someone they love to read to them about? Maybe even important enough to read by oneself! Well, some things are always important, no matter what age we're at. In this case the important thing is to be ourselves. You'd think that wouldn't be too difficult since really, we can't be other people, but No! As usual, we humans find ways of complicating things.

Like us all, kids want to be loved. They want to be accepted. They want to be popular. Really, they just want to play and be with people they can trust and laugh with. Simple, right? But think of the pressure they're often under. Adults always asking them what they want to be when they grow up. Other kids getting attention and praise (and 'likes,' don't forget likes!) for being good at things. It seems so hard to just be yourself when your self doesn't seem good enough. It's pretty tempting to try to be like those popular people.

I've always thought it was wrong to tell kids they can be anything they want to be. That's simply not true. We each have our limits and we each have our potentials. There's nothing wrong with that. What we should do is tell kids they can be anyone they want to be, and then help them figure out what their own particular set of skills and talents are. In retrospect, perhaps Robin and I should have called this book 'You do you.' That's what George figures out to do, and that's what you can help your little people figure out if you read this with them.

To the little kid in all of us!